Nowadays, when houses and apartments are newly planned and built, the opportunity is increasingly used to make them barrier-free or at least to take all precautions so that the living space can be redesigned to be barrier-free with little effort.

Apartments for wheelchair users or other people with disabilities such as blind or short stature often require more living space. In the old DIN 18025 (parts 1 and 2), this was generally based on 15 m².

With regard to an appropriate apartment size, the law on social housing subsidy (Housing Promotion Act – WoFG) plays a role nowadays.
There it says in § 10 apartment sizes:
(1) The following principles must be taken into account when determining the limits for apartment sizes in the federal states:

In addition to DIN standards, which have no legal status and therefore do not have to be complied with, but can be observed voluntarily, there are state legal provisions that must be complied with together with federal laws.

The bedroom – barrier-free living and living

The bedroom is of central importance for the elderly, the sick and people with disabilities. These groups of people usually spend significantly more time in the bedroom. The bedroom therefore not only functions as a place of retreat or relaxation during the night, but is also an important recreation room due to the longer length of stay there. In addition to barrier-free usability, attention should therefore also be paid to a design that is as pleasant and cozy as possible, which creates a feel-good atmosphere.

In general, it is recommended that the bedroom is next to the bathroom or sanitary area (short distances).

In a barrier-free living environment, the bedroom, like the rest of the rooms, should be cut as straight as possible. Angled areas are usually disadvantageous, depending on the individual requirements of the user.

In the bedroom there should be a telephone connection and ideally also a television connection. There should also be a sufficient number of sockets (height 85 cm, at least 50 cm from corners), as these are required for therapeutic aids, for example.

All control elements (such as light switches) in the barrier-free bedroom should be in visual contrast to the surroundings and should be tactile. In this context, one speaks of the two-senses principle. In addition, a label on the control elements should provide direct information about the respective function. The effort required for actuation should be very low. In addition, there should be unmistakable feedback for the user that the desired function has been triggered via the control element. This can be done acoustically, visually or mechanically (position of the switch).

For new buildings, the installation of smoke alarms in the bedroom is required by law in almost all federal states. There are differences between the federal states when it comes to existing buildings. In general, regardless of a legal obligation, it is advisable to install and maintain a smoke detector in the bedroom.

The floor in the barrier-free bedroom should be laid firmly in the room. It should have no thresholds and be slip-resistant. For people with a visual impairment, it is advantageous for improved orientation if the floor material used is visually clearly different from the walls and doors. The floor should not be made of a dazzling or reflective material. It should also be easy to keep clean and not be electrostatically charged.

Trip hazards in the form of runners, carpet edges, exposed cables and the like should be avoided at all costs. For example, cables can be laid behind skirting boards.

In order to prevent allergies, only non-irritating materials should be used in the bedroom.

Passages from the bedroom to other rooms in the apartment or hallways should have a width of at least 80 cm or 90 cm (minimum clear width) so that wheelchair users or people with walkers can cross them without restrictions. 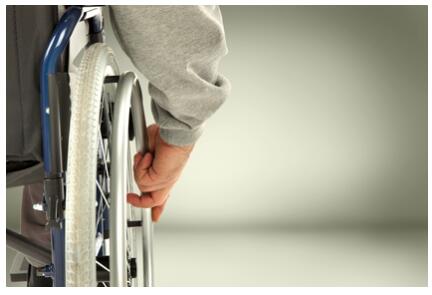